BOOK REVIEW: FOR DARKNESS SHOWS THE STARS (YA Dystopian) 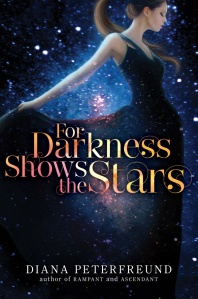 FOR DARKNESS SHOWS THE STARS by DIANA PETERFREUND

ENGLISH TEACHERS TAKE HEED! This book should – no, MUST – be on the classroom reading list. I’d say it is best for the 8th grade and up crowd due to size, but on a reading level, it is not at all difficult. I’d dare say this should be required reading (perhaps ditch that puker of a novel known as THE SCARLET LETTER – gag – and replace it with Peterfreund’s tour de force). This is a literary gem with rabid appeal to the teen.

The story is a dystopian retelling of Jane Austen’s PERSUASION. In the future, humanity has nearly reached extinction. Man’s race to create a better human and world – live longer, run faster, less disease, greater bounty – has resulted in a cataclysmic error. Those humans who have partaken in these genetic alterations lead to a race of humans that are mentally limited and child-like.

Heroine Eilliot North and her family, however, have escaped this fate as they (and their fellow believers, known as the Luddites) shunned such advances as an affront to God. They hid, underground during the times of the Reduction (which produced the limited individuals known as the Reduced). When they returned to the surface, they took it upon themselves to care for the Reduced, however . . . the Reduced became more like slaves to the Luddites, who saw themselves as nobility.

Years after this Reduction, the Reduced are starting to give birth to children who are not, themselves, Reduced. The children are entirely normal. While the Luddites call the children CORs (Children of the Reduced), these new generations reject the term, believing that time of the Reduction is over. Instead, they call themselves Posts – Post Reductionists. Needless to say, the North family relies on the work force of their Reduced and COR workers. They do not want to buy into the idea that the Reduction is over and they cling to their beliefs, outlawing all technology, medicines and any interference with nature. Elliot, however, is wavering on her Luddite beliefs and has even gone so far as to secretly develop a stronger yield of wheat through genetics. A big no-no. Elliot is also childhood friends with Post child and servant, Kai, who runs away to a Post enclave.

Years passed since Elliot last saw her beloved friend and she is shocked when the fabulous and technologically advanced Cloud Fleet (solar-powered ships) asks to lease the North family’s ship-building facilities. Elliot agrees (and managed to sooth her strict, Luddite father with a bribe of amazing Cloud Fleet horses) and is shocked to come face to face again with Kai, who is now Capt. Malakai Wentforth, a Cloud Fleet Captain.

The majority of the novel is spent on Elliot coming to terms with her renewed affection for Kai, who has obviously tampered with nature and therefore risks the wrath of God in the Luddite’s eyes. But as Elliot begins to see the truth of what she has always been taught, she starts to question the reality of the Reduction and if, in fact, the Luddites are clinging to an ancient, erroneous belief. She also starts to question who she truly is at her core and the strength to stand up to her domineering father who treats the Reduced and Posts so badly.

A literary gift for the mind. A true masterpiece for the classroom and a story in which teens will actually be enthralled :)

5 Comments on “BOOK REVIEW: FOR DARKNESS SHOWS THE STARS (YA Dystopian)”