Finding MJ was up there with finding Kian – basically I was screwed. I had resorted to digging through RF sights and praying I could drop a nameless model into what I needed. But after weeks of searching, I came up with a big, fat NOTHING. When I relayed the fact that I needed a shaggy-haired, tall, surfer-esque kid but hadn’t found anyone, John Sullivan said he might have who I was looking for.

As luck would have it, I had seen this kid, Sean Potter, before – as Kenickie in the Drama 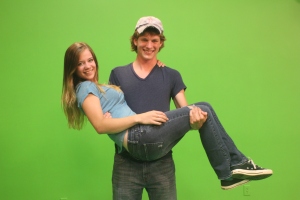 Club’s production of Grease. He was awesome in the part and he fit the bill for MJ perfectly. Super-tall and lean-muscled, mildly crazy and decidedly exuberant, he literally WAS the character, right down to personality. He was a perfect fit.

Favorite quote (from anywhere): “It’s not who I am underneath, but what I do that defines me” – Bruce Wayne

How did you first find out about the fact that some random author (me – lol) wanted to use you as a cover model? Was it through me or someone else? I found out about via my old theatre teacher and personal mentor John Sullivan. He essentially told me “I got you a job modeling”, and I couldn’t argue with that!

What made you say “yes” and did you think I was insane when we talked on the phone before the shoot? I said yes for two reasons. Reason one is that I’ve always wanted to model, and I wanted to see if I was any good at it. Reason two is that Mr. Sullivan basically told me that I was doing it, so I didn’t have that much choice in the matter… I thought Kate was a little addled, certainly, but doesn’t every author have to be a little quirky?

What was it like to be the physical embodiment of a fictional character? I’ve been doing theatre since 2007, so I’m used to embodying fictional characters and giving them life. Most plays and movies are based on books anyways, so it didn’t feel that different at all. 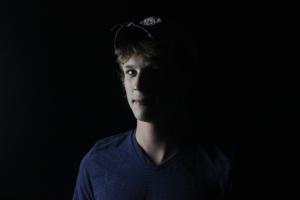 What did you think of the shoot when you were there? Did you have any worries? I had an excellent time at the shoot catching up with my friends, particularly the legendary Justin Blaze. There was enough pizza to keep me satiated, so I had no worries whatsoever.

What has your family and friends thought about the whole thing? My family was happy that I was able to do something dramatic over the summer. My friends all thought it was pretty awesome that I got to be part of something like this.

We have had a lot of comments about how damn cool your character – MJ – is. Is it weird to be the face of a character that so many adult women (and teens) adore? It doesn’t feel any different yet, because I haven’t met anyone who’s said anything to me about it! And I don’t view M.J. as “my” character. It’s Kate’s character who I simply got to embody. The screaming adults and teens should be thanking her for writing such a damn good book!

Would you be willing to be shot again for the UNDERTOW series in the future if need be? Maybe sign books as the character, MJ Williams? Hell yeah.