Book Review – THE TRUTH ABOUT ALICE by Jennifer Mathieu 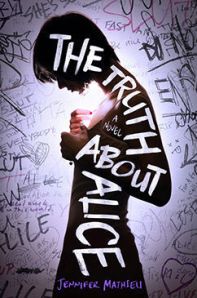 I was given the book via NetGalley for review – thank you to Roaring Brook Press for the opportunity to read it.

THE TRUTH ABOUT ALICE by debut author and English teacher, Jennifer Mathieu, is an intriguing read. It is a story of gossip, cruelty, lies, and the unfailing desire to put oneself above others. It is about small town mentalities and the social stoning of one person to assuage all the sins of the group.

ALICE is told through the eyes of four characters, who relay what they know about Alice – though we learn nothing from Alice until the last chapter (I actually found that a stroke of brilliance on the part of Mathieu). Alice is accused of sleeping with quarterback and beloved small-town son, Brandon (who she is also blamed for killing) and college kid Tommy, during popular girl Elaine’s party. The novel shows the evolution of gossip, betrayal, and the pack mentality of socially isolating one girl.

As for the characters – there is Elaine (the ultra-popular babe and superior, self-obssesed twit), Kelsie (former BFF and wallflower to Alice, who turns on her on a dime), Josh (the football player with is sexually conflicted and BFF to Brandon), and Kurt (the ultra smart loner who is considered a general dweeb, but befriends Alice).

All in all this was a really interesting read – especially the WAY it is written and how the reader slowly builds a full picture of Alice and the mind-set of her accusers. All the characters slowly evolve from self-centered and shallow to more emotionally complex and conflicted. There are some tougher topics in the book, so I’d say beware for the under-15 crowd, but by and large I liked this book. It is, however, a one-time read for me. Books I adore, I read over and over, but books I just “like” get read only once. This falls to the later category, mainly because of how it portraits teenagers.

You see, I drive a school bus. I hear what my students say, and they actually talk to me quite a bit. They relay their day, sometimes gossip, sometimes their hopes and fears. I am a CDL licensed, freaky sort of therapist in some ways. Yes – I’ve seen bullying, but I have also seen equal moments of compassion and students standing up for one another. Kids DO gang up on one another, but they also will come to one another’s defense. For this girl, Alice, to be ENTIRELY isolated by the whole school AND PARENTS, with the exception of one kid named Kurt, seems far-fetched for me.

How Mathieu, an English teacher, sees teenagers is probably very different than how I see them, as a driver. On my bus, they shed their “school” skin, become their own person, and I get a glimpse of who they truly are for two hours, five days a week.

And because I have driven them for two hours a day, for nearly three years, I have gotten to know them and I can say, without question, that ALICE would have had many friends on my bus.