THIS IS IMPOSSIBLE. I have a crush on so many, MANY authors, so I call today’s challenge “BS!” but, whatever. These are some of my all-time favorite authors thanks to the brilliant books they write. Eva Darrow’s for The Awesome, Sarah Maas for Throne of Glass and A Court of Thorns and Roses series, AC Gaughen for Scarlet series, Jennifer Armentrout for the Lux series, Renee Ahdieh for The Wrath and the Dawn, Leigh Bardugo for the Shadow and Bone series, and Veronica Rossi for the Never Sky series

I always have books piled on my nightstand and I’m usually in the processing of reading at least one all the time. I just finished Marissa Meyer’s Cinder, which I did enjoy, and I ordered the next book, Scarlet (I’m waiting for it to arrive at Titcombs Bookshop). I also got the complete End of Days series from the dog for Christmas. Yes – from the dog. Anyway, I’ve heard great things about the series, so I’m starting the first book, Angelfall, tonight. What are YOU reading? 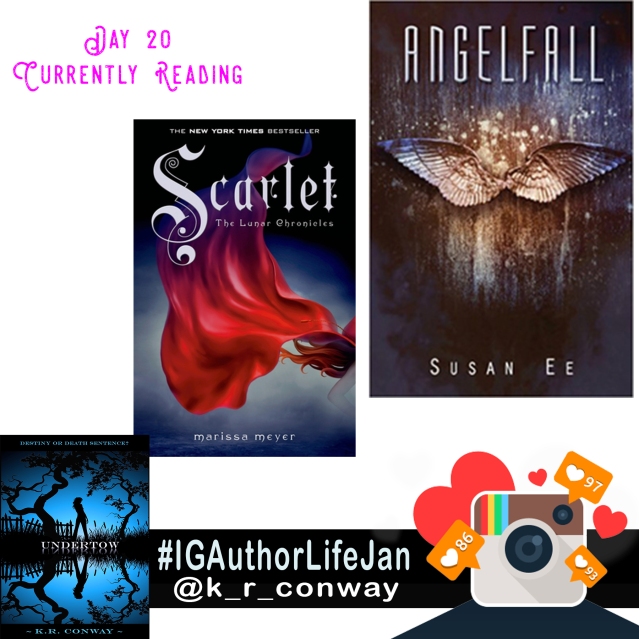 This was tough for me to choose, but I always loved the review I got from Jackie at She Reads She Blogs. While we authors can get our butts kicked from time to time with reviews, the really great ones make up for the bad ones ten times over :)

This #writertip is so simple, yet often overlooked. If you want to be a writer, you MUST be a reader. We learn our craft from other writers – how to turn a phrase, compose a fight scene, build rich characters – everything. When I teach a writing class, I’ll ask participants if they read novels, and more often than not, these new writers will confess they don’t read that often. Reading is our form of TRAINING – our workout. If you don’t want to read, then don’t be a writer. 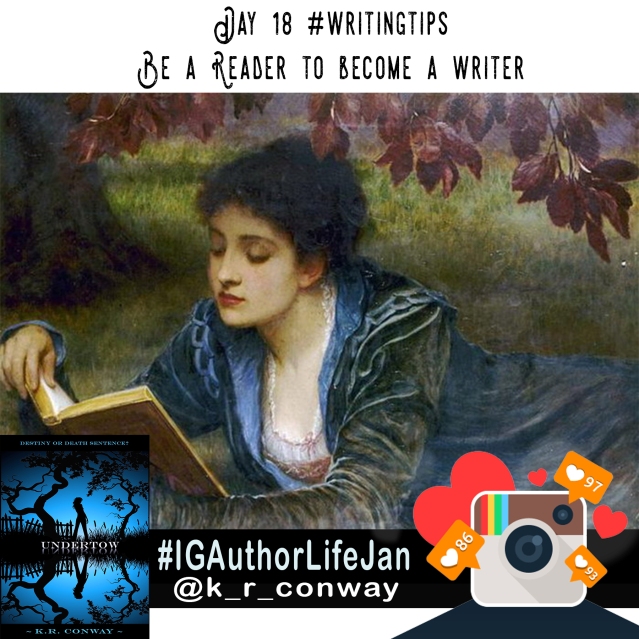 This is from a manuscript that is not part of Undertow, but a new world with new characters. Enjoy :) 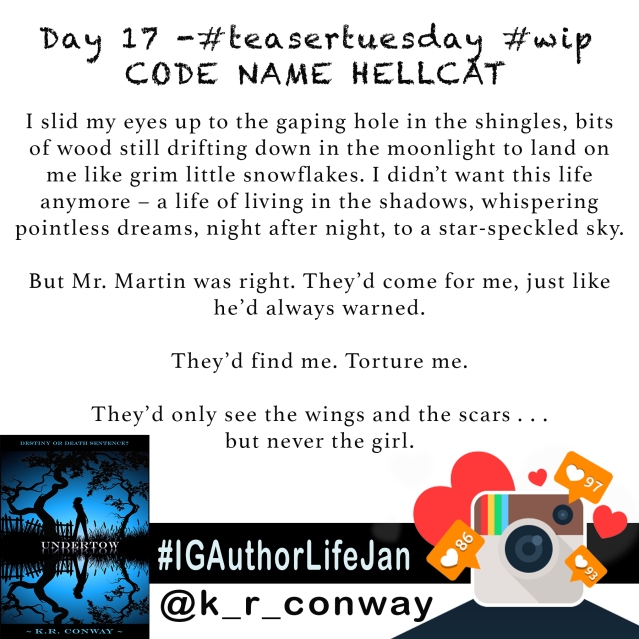 Dude, this one is a no-brainer. I HEART Titcombs!! I am a mad fan of all bookstores to be honest, though I hold a special place in my heart for the Indie shops :) Shop local and make a difference for the families that own these shops!

Truthfully, the devil in me wanted to post a mugshot, but I have yet to be tossed in jail, so I was lacking in that department. Goals . . . perhaps I should add it to the Vision Board thing.

Anyway, I took a photo of a mug (cup, not face) that I purchased at The King and I, which I saw at the Providence theater. It was flawless! I went with my mom and daughter (thanks, Mom!), and my daughter was awed by the beauty of the theater.

Being a kid who grew up with a playwright and actress for a mother, I was used to the theater, but my daughter – it was a totally new experience for her. Afterward, she talked about going again, and I hope to take her to see RENT at some point. If you ever have the chance, go see a play. It’s yet another way to tell a story and become lost in the vibrant world tucked into three hours at a theater.

Now, under my King and I mug, I stacked what I consider to be a MUST READ series for writers. Leigh Bardugo’s Shadow and Bone (The Grisha series) is truly some of the finest, most exquisite writing I have ever read. I consider them to be a critical, essential part of being a writer. After all, reading is how we learn our craft and hone our methods. Shadow and Bone is a cornerstone course in how to write and world-weave, and I refer to it frequently when teaching writing classes, participating in author panels, and visiting schools. #lbardugo

I’d like to start this post by saying I had no clue what the Vision Board Day thing was. I actually thought is was like, a vision test. You know? Read the letters on the board a mile from ya? Yeah – I’m outta the loop, obviously.

Anyway, if I had one overall vision for 2017 for me, as a writer, it would be to be in the query trenches by December, get picked as a presenter at DragonCon, be able to join SFWA, and possibly have a manuscript that has a shot at a YALSA award.

‘Course, I also want to win the lottery and not have my country be a dystopian disaster, but, hey – my ambitions are lofty, if not entirely unrealistic. 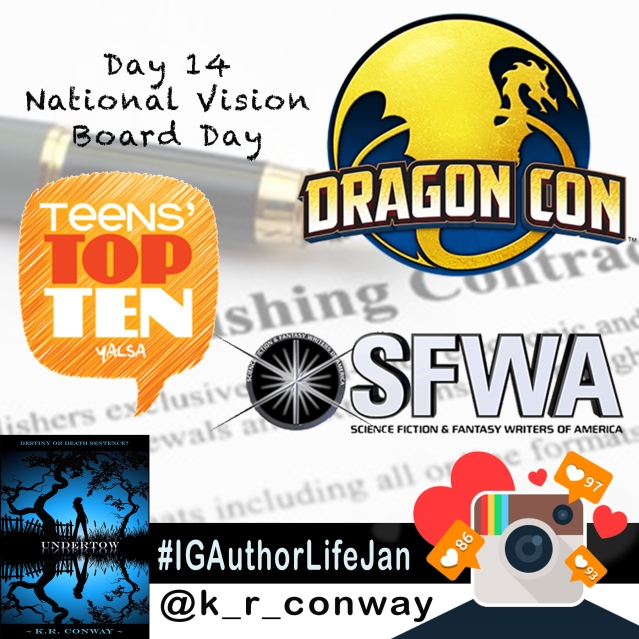 Today is Friday the 13th of January and I thought that I should post a book I loved and found to be unexpectedly creepy when I read it: These Broken Stars by Spooner and Kaufman. Holy FRAK, I got totally spooked by this one.

Anyway, my review of this MUST READ is below. #amiekaufmanauthor #meaganspooner 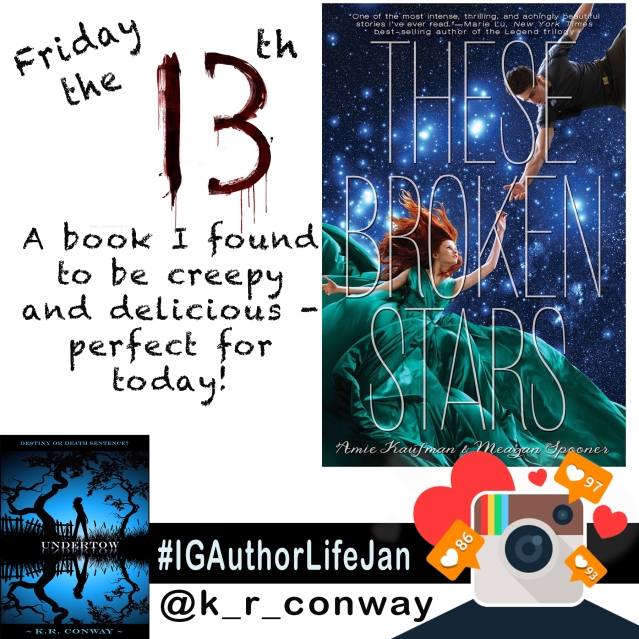 Only once in a while, does a book shave a few decades off my aged brain and cause me to run around screaming like a teenager, out of my mind obsessed. I tell everyone about it, down to the random lady counting her coupons in front of me at Market Basket. Really – I did, though she eyed me warily, debating whether to taser my weird butt.

I tell the kids on the bus, the bookstore I bought it from, other story-freaks like myself, but most of all, I tell other novelists. Because, quite frankly, this blew me away as a writer. I understood what Spooner and Kaufman did in THESE BROKEN STARS, and it left me awed. It was like being at a concert, listening to a band that people rarely listen to, but everyone is screaming at their greatness because you know, KNOW, this crazy band is about to skyrocket.

To me, Spooner and Kaufman broke the rules of most YA tales out there, writing the book almost like a film, and I ADORED it. More importantly, they didn’t put angst in there for the sake of angst. The leads, Lilac and Traver, had reactions and emotions that FIT – not overblown, not excessive, just 100% real. Plus, the authors scared the crap out of me with the whispering voices-in-the-night thing. Jeeze, I’m a wimp I know, but stuff like that FREAKS ME OUT. Loved it – pure, skin crawling torture, like JAWS – show just a little, nothing crazy, but how it is presented sends chills through your body.

Brilliant – BRILLIANT – was the idea to interlace the lead boy’s interrogation (a jump forward) with the storyline of what had happened. Dear god almighty – it was a stroke of genius. It is how the entire story kicks off – seven lines, between an unknown interrogator and a young, decorated war hero named Traver and his mention of lead girl, Lilac LaRoux:

“When did you first meet Miss LaRoux?”

“Three days before the accident.”

“And how did that come about?”

“How could it possibly matter?”

I read those lines and knew, KNEW I was about to enter one hell of a story. As a writer, the killer way THESE BROKEN STARS opens with just seven lines that say so much, literally made me hold my breath. I read the page several times, and thought to myself, “This, THIS is how storytellers find greatness.”

Maybe it’s because I am a novelist and professional writer, but that single page caused a devious grin to spread on my face, and I tuned out the world until I hit the last line of the book.

The story was insane – loved every unique little plot point, every sway of the tall grass in the plains, every smoking detail of a space liner as it plummets to its death on an unknown planet. I lived inside the world that Spooner and Kaufman created, tearing through the book in a day – yes, A DAY and it was a work day, so I read like a druggie needing a hit. It’s a world that haunts me still . . .

I can’t even describe the entire story, but someone called it “Titanic in Space,” but that’s not accurate. No this story is a brand new world – a new vision of greed and sacrifice and what it is to really exist. If anything, it is the TV show LOST, but set on an abandoned planet with only two people who make it off the “jet” alive.

The silence that encompasses the two survivors of the space liner, Icarus, are opposites on the social spectrum – there is Lilac, heiress to empire of wealth and controlled by her powerful father. She is a bit of a rebel herself, but is surrounded all the time by those who seek to bend her life the way her father demands.

Then there is Traver, a young and decorated war hero. He is also aboard the Icarus, dragged there by a media-frenzie surrounding his story – a boy from nothing who becomes the pinnacle of heroism. He hates it and just wanted to go back to his simple life.

But then something terrible happens to the Icarus, and it plummets with all 50,000 souls aboard. Traver and Lilac, thrown together among the chaos of stampeding passengers, find their way to a mechanic’s escape pod and manage to crash on a planet, surviving the impact.

I love how Kaufman and Spooner paint the world they land on and the desolation of apparently being the ONLY people on the planet. I love how the authors portray the bits and pieces of violence that had rained from the sky when the Icarus fell, and how Traver tries to hide it all from Lilac . . . though she is no fool.

But it is the apparent descent into madness by Lilac, and how Traver tries to handle it, that is fabulous. And Lilac evolves into who she truly is on the inside as that spark that was so completely snuffed by her father, begins to ignite.

While unmissable by readers, THESE BROKEN STARS will be unforgettable if you are a writer. Do yourself a favor and tune out the world for a day and just become LOST with Traver and Lilac.

In the Summer of 2013, before Undertow even came out, I had the honor of working with some very talented Cape Cod teens – all of who looked like the characters from Undertow. They were bold enough and brave enough to be the faces of a book that had yet to meet any readers – for all they knew, it could’ve been a total flop. Thank goodness Undertow was well received by reviewers. That cast of “characters” went on to be at book launches and sign as their characters (and oh, the teen girl fans . . . let me tell ya).

Emily Penn was the face of Elizabeth Walker. To this day, when I write scenes involving Elizabeth, I see Emily’s face. Mad thanks to all the young adults who braved hours in a dark photoshoots to bring Undertow’s characters to life!